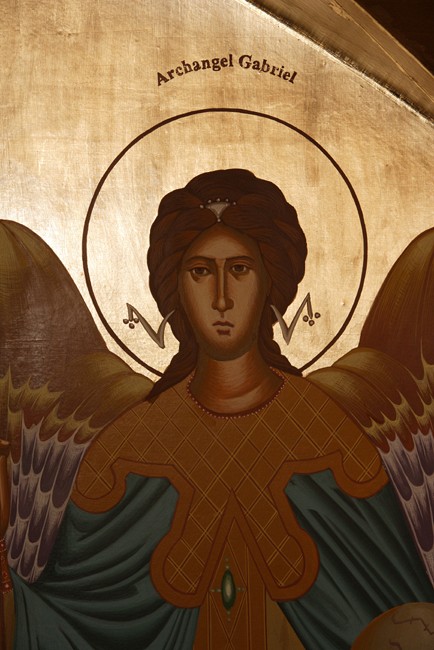 St. Gabriel, the Archangel, whose name means “Man of God,” announced to the Virgin Mary the glorious and joyous Incarnation of the Son of God from Her womb and he told St. Joseph to take the Theotokos and the Child to Egypt. He also announced the future Incarnation of the Son of God to those of the Old Testament; inspired the Prophet Moses to write the first five books of the Old Testament, announced the coming tribulations of the Chosen People to the Prophet Daniel; and appeared to St. Anna with the news that she would give birth to the Virgin Mary. Archangel Gabriel remained with the Virgin Mary when she was a child in the Temple of Jerusalem, and watched over her throughout her earthly life. He appeared to the Priest Zachariah, foretelling the birth of the Forerunner of the Lord, St. John the Baptist. When the Lord prayed in Gethsemane before His Passion, Archangel Gabriel strengthened Him. And it was Archangel Gabriel from whom the Myrrh-Bearing Women heard the joyous news of Christ’s Resurrection. The Synaxis of the Holy Archangel Gabriel is celebrated on March 26.