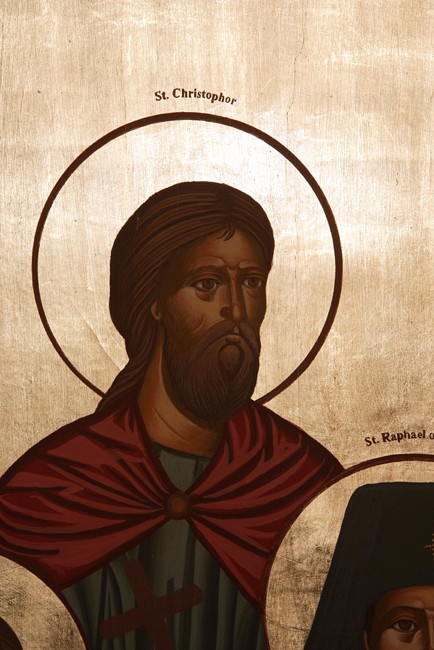 St. Christopher, the Patron Saint of Travelers, lived around 250 A.D., in Lycea. St. Christopher was a man of unusual strength. He became a ferryman, carrying people across a river on his shoulders. One stormy night, Christopher carried a Child who insisted on being taken across at that very moment. With every step Christopher took, the Child seemed to become heavier. Halfway across the river, Christopher felt that his strength would give out, and that he and the Child would be drowned. As they reached the other side, the Child told him that he had just carried all the sins of the world on his shoulders. Then He ordered Christopher to plant his walking stick in the ground. As he did so, the stick grew into a giant tree. Then he recognized Christ, the King Whom he had vowed to serve. The name Christopher means “Christ-bearer.” After many fierce torments, St. Christopher was finally beheaded with a sword, after converting as many as 50 thousand pagans to Christ. His relics are now in St. Denis’ abbey in France. St. Christopher is commemorated on May 9.